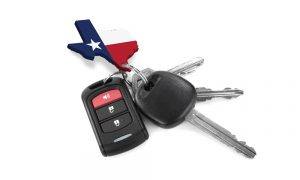 In the old west, if you were convicted of certain crimes your punishment would be forfeiture of your horse. This was a serious punishment – at that time your alternative transportation options were quite limited.

Texas is taking a page out of the old west when it comes to dealing with anyone who falls far behind on their child support. But rather than targeting your horse, they are after your horsepower. Beginning this December, any Texas resident owing six months or more of child support will be unable to renew their vehicle registration.

For those with any knowledge of how Texas deals with child support scofflaws, this latest action is no surprise. The state is very aggressive in pursuing these individuals, and already holds the power to revoke all forms of personal licenses, including driver’s, professional, and recreational. This latest action by the Attorney General’s Office is just the latest measure to force compliance.

Here’s how it will work. This September, any resident already behind on their payments by six months or more will be notified of the new regulation in the standard three month renewal notice sent by the Texas Department of Motor Vehicles. The letter will likely state that there is currently a “hold” on that person’s registration renewal, which would normally be due in December. It will include information on how to have the hold removed.

These same individuals will also receive a letter from the Child Support Division of the Attorney General’s Office prior to the renewal date. It will outline what must be done to clear the hold on their registration. While this has obviously not yet gone to effect, as the rule stands now, anyone who doesn’t take the required action will have an expired registration come January.

While it is not my purpose to debate the pros and cons of this new child support enforcement mechanism, it is important to note that some contend this is bad public policy. Taking away a person’s transportation cannot help but make it more difficult to hold a job, make a living, and pay for their obligations. However, there is also the argument that asks, “how is revoking their auto registration going to make it more difficult to do what they are already not doing?” It is similar to the argument that putting a person in jail for not paying child support means that they will lose their job and have no chance of their paying the support they owe in the future. Judges do not usually buy this argument, for good reason. Anyone who practices family law in Texas knows that putting people in jail for not paying child support frequently results in the child support suddenly being paid. Somehow, the money becomes available. Child support becomes a priority, which it should be. The same may very well be true of revoking a scofflaw’s auto registration. It is important to add that only a small number of egregious cases result in incarceration for past-due child support.

The Attorney General’s Office will say that there are procedures in place to be sure that honest, hardworking parents who want to do the right thing and satisfy their debts to their children are able to continue to drive legally. First, there is a dedicated phone number for all registration-related inquiries. And second, parents will not be required to completely pay all past due monies – just establish a payment schedule and keep it current.

The reason this public policy question bears mentioning is because of how this rule was enacted. It was not written into law due to a bill that was passed by the Texas state legislature. The Attorney General’s Office believed it had the authority to make this change under the Texas Family Code. As such, it could be challenged (and possibly reversed) in court. On the other hand, many of the procedures the Attorney General uses have been put into place without the legislature being involved. They fall under the powers and mandate of the Office of the Attorney General to collect child support. In the 30 years I have been practicing law, the amount of child support collected has grown enormously. This has resulted in not only many more children being provided for by their own biological parents who have the responsibility for them, but an overall reduction in the costs to the taxpayers of Texas.

There is another criticism of this rule – it only targets registration renewals. If you buy a new vehicle, there will be no holdups if you’re behind on your payments. So stay tuned to see how everything turns out.

My firm will be glad to represent anyone served with such a notice.