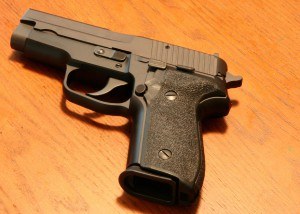 Standard injunctions routinely imposed in family cases in Texas can cause our clients to violate ‘The Brady Bill’, 18 U.S.CA § 922(g).

The mutual injunctions routinely used in divorce cases in Texas include standard language prohibiting the use or threatened use of violence by one party to the divorce case against the other party. Therefore, it would appear that anyone subject to such an injunction in a divorce case is prohibited from possessing a firearm, even if no domestic violence has ever occurred or been threatened.

In U.S. v. Emerson, 270 F.3d 203 (5th Cir. 2001), the husband, Dr. Emerson, owned a pistol, which he had purchased a year earlier. Dr. Emerson never got rid of the pistol and federal grand jury returned a five-count indictment against him.

The Fifth Circuit followed a literal reading of the statute, which states only that the Court must explicitly forbid the use of threats or violence against a spouse or minor child. The court refused to read into the statute a requirement that there be a finding of abuse or danger of abuse. The Court of Appeals reversed the trial courts dismissal and remanded the case to the lower court for prosecution.

The Fifth’s Circuit interpretation of 18 U.S.C. § 922(g) makes clear that it a federal criminal offense to possess a firearm while under an injunction, issued after notice and hearing, which contains the standard violence/harassment language which is included in almost all of the mutual injunctions and temporary orders in divorce cases. Given that almost half the households in Texas contain at least one gun, this decision is one all family lawyers must bear in mind when drafting temporary orders.

Here is a quote from a leading Texas family law attorney: “…if injunctions are put in place as a result of a temporary hearing or alter a temporary hearing occurs, the party possessing the firearm is in violation of the federal statute. It would appear that this would be the case even if the parties waive a hearing and enter into agreed mutual injunctions or agreed temporary orders which include the *magic words” regarding threats or violence. Moreover, there are no statutory exceptions included in 18 U.S.C. § 922(g), so it would appear that once the injunction is in place, the ban on possession is absolute, until further order of the Court.

This ruling places on the family law practitioner the duty to explain the ramifications of the boilerplate injunction language. While previously, mutual injunctions could generally be agreed to with a minimal amount of controversy, now the lawyer must clarify whether or not his client possesses any firearms before agreeing to any injunctions containing such language. Should the client own a gun, it will be necessary to eliminate the language from the injunctions which would trigger the applicability of 18 U.S.C. § 922(g)…

For…those…whose occupations require that they be armed, such as law enforcement officers, avoiding having such an injunction imposed by the Court obviously takes on much greater significance, and care must be taken regarding any such injunctions.